As the Women’s EUROs comes to St Mary’s for the third and final time, Saints Foundation participants have been enjoying the opportunities the tournament’s spotlight has offered.

Throughout the competition’s two week visit to Southampton, our participants have been getting in the spirit by attending the games and getting stuck into their own activities in celebration of the tournament.

We’ve handed out more than 500 tickets to participants from across our projects, from primary school age to our Senior Saints aged 65 and up.

Last Thursday, more than 40 local girls aged 11 to 14 came together for a female Kicks tournament at Goals in Millbrook, followed by a trip down to St Mary’s to watch Northern Ireland face off with Norway in the first of Southampton’s host games.

Girls on our Premier League Changemakers programme refereed the tournament, putting the leadership skills they’ve been learning all season into action. They’ve also been at St Mary’s for each game, participating in the pre-show fanfare by flag-bearing as the teams line up for their national anthems.

On Wednesday, our Community Champions brought together girls teams from their schools to take part in a Female Football Festival at Bitterne Park. The hosts emerged victorious after a hard-fought tournament under the midday sun.

Tonight, the third and final of St Mary’s Women’s EURO games sees England’s Lionesses take on Northern Ireland in a sold-out UK derby. For those without tickets, the game will be shown on the Saints big screen outside Westquay, with family fun activities around the shopping centre all day as part of the club’s Summer of Saints initiative. 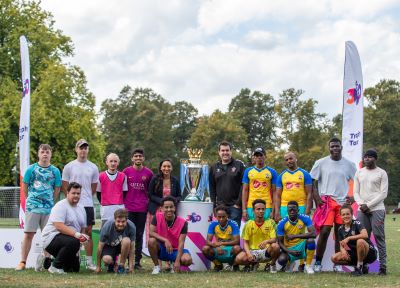 The Trophy paid a visit to one of Saints Foundation's newest programmes.

Video: Ward on improvements to be made